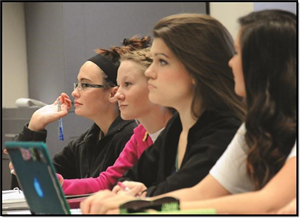 MSU BILLINGS NEWS SERVICES — Montana State University Billings has started the 2013-14 academic year with just under 5,000 students. This is the first year in the past five where MSU Billings enrollment has dipped below 5,000 students.  With the slight decline MSU Billings still holds strong as the third largest institution in Montana.

Year-to-year, the overall enrollment is about 2 percent lower at the university campus and City College campus. However, the institution’s retention rate from fall 2012 to fall 2013 has increased by 3%.  First-time full-time freshman on the University campus were retained at nearly 60 percent, up 4 percent from 2012.  “We have done a phenomenal job retaining the students attending MSU Billings,” commented Chancellor Rolf Groseth.  “In the face of declining high school enrollment in Montana and a strong economy in Eastern Montana we have continued to show the value of higher education.”

MSU Billings continues to have an affinity amongst Native American students, Hispanic students, and International students.   Native American students being educated at MSU Billings in 2013 has increased by 5 percent while Hispanic students have increased 2 percent when compared to a year ago.  International Students attending the institution have increased nearly fivefold from 33 in 2009 to 153 this year.

Overall, more Montana students have found MSU Billings a great place to live while they are taking classes. Between 2009 and 2013, the number of students living in the residence halls has increased by 7 percent.

In an address to faculty and staff, MSU Billings Chancellor Rolf Groseth said the university had planned for decreased enrollment this year, mostly because of declining overall high school enrollment in Montana coupled with another record graduating class of nearly 1,000 students last spring. The chancellor said the university will continue to work on strategic plans to respond to local, regional and statewide workforce needs and to help students move through their academic programs in an efficient and affordable manner.

Begun in 1927 as a teachers college, MSU Billings has become a comprehensive regional urban university with about 100 academic programs in areas of Arts and Sciences, Allied Health Professions, Business, Education and Technology. In addition, students can choose from more than 200 classes offered in 21 online programs.

To find out more about MSU Billings academic offerings, go to www.msubillings.edu or call the Office of New Student Services at 657-2888.