MSU BILLINGS NEWS SERVICES — Montana State University Billings today announced the latest poll of Montanan’s views of statewide and national issues. This is the 25th year the survey has been conducted and during that time, 27 surveys have been completed. 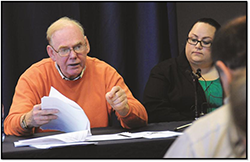 The poll results will be released Thursday at press conference held in the Missouri room at MSU Billings University campus and a PDF of the results will be posted at 10:30 a.m.

Montana’s were polled on topics including Obama’s popularity, Syria, the ACA, the ACA and government shutdown, the vote on the debt, job approval ratings for Montana Elected officials, legalization of marijuana, and same sex marriage among a myriad of other topics.

The poll reports summarize the results of a statewide random sample telephone survey of adult Montanans.  The poll was conducted in late September, 2013.  Students enrolled in the course Political Science 342, Media, Public Opinion, Polling completed 477 interviews for this survey.

The survey was completed using random digit dial methodology, which selects both the phone numbers and members of a household to interview.  Land line and cell phone numbers were included in the sample.  The poll was conducted using MSU Billings’ CATI (Computer Assisted Telephone Interviewing) software.  Multiple attempts were made to reach selected households.