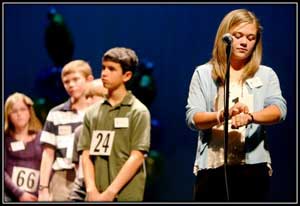 Take some time away from ‘March Madness’ and learn how to actually spell Coach K.  Come watch one of the most exciting, nail biting events in the state!  Cheer on Montana students as they compete for a trip to test their spelling skills at the National Spelling Bee in Washington, D.C.  The Treasure State Spelling Bee will be held in Petro Theatre on Saturday, March 23, at 1 p.m.  Attached is the official program with the field of 67.  By the way, all them can spell Krzyzewski.

The competition is sponsored by Lee Enterprises and MSU Billings.  Admission is FREE and open to the public.

PHOTO ABOVE: Erin Dringman of Melville writes out a word on her arm before she spells it in the 2012 Treasure State Spelling Bee at MSUB. Dringman placed third in the 2012 competition. (photo Billings Gazette)