Lovec looks to make a mark on MSUB Science… 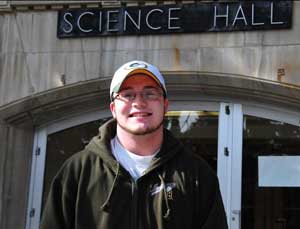 MSU BILLINGS NEWS SERVICES — It is never easy being first.  Don’t tell that to Carter County Bulldog, Cory Lovec, though.  Lovec recently became Montana State University Billings first nominee for the prestigious Goldwater Scholarship.   Established in 1986, the Goldwater Scholarship is the most noteworthy award in the United States given to undergraduates studying in sciences, mathematics, or engineering.

An Ekalaka, Montana native, Cory is a junior majoring in chemistry and minoring in physics and mathematics. He plans to earn both a Pharm.D. and Ph.D. in chemistry so that he can pursue a career in drug synthesis research.

Like his high school mascot, Lovec is persistent. Ever since coming to MSUB, Cory has been doing research with Dr. Matt Marlow in solid matrix luminescence, and together they have presented their work at the Montana Academy of Sciences and Montana Space Grant Consortium. They have also had an article accepted for publication by the journal Polycyclic Aromatic Hydrocarbons. Cory is a member of the University Honors Program, plays in the pep band and orchestra, and is the sports editor for The Retort.  He has also become a bit of a “Science Celebrity” on campus. 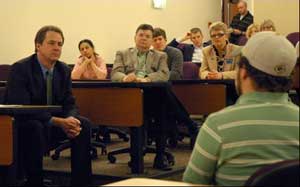 Cory recently visited with Governor Steve Bullock about the need for a renovated Health and Science Building on the University campus.  “I wanted him to know that students from the Eastern part of Montana can do great things in science,” said Lovec.  “And we don’t have to go to Bozeman or Missoula to make it happen.”

Ironically, the Goldwater Foundation will announce scholarship winners by April, the same month legislators will decide the fate of the Health and Science Building.  Cory and his classmates hope April will be their month.

PHOTOS: Corey Lovec pauses for a photograph just prior to attending a chemistry class on the University campus; Governor Bullock meets with Corey and other students and faculty to discuss the science building.