BILLINGS, Mont.– A central figure in the history of Montana State University Billings’ athletics, Harold S. “Shorty” Alterowitz, passed away June 21, at the age of 95.

A Celebration of Life ceremony honoring Dr. Alterowitz will be held on Saturday, July 6, at 1 p.m. in Alterowitz Gymnasium. The public is welcome to attend the celebration. 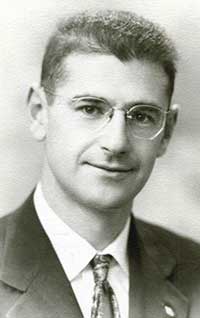 The main gymnasium in the Physical Education building on the MSUB campus was named after Alterowitz following his 36-year service to the institution. He was the third men’s basketball coach in the school’s history, and is currently fourth in all-time wins in program history. Alterowitz won 78 games at then Eastern Montana College from 1948 to 1957.

“Dr. Alterowitz is a Yellowjacket icon,” MSU Billings’ Chancellor Rolf Groseth said. “He will forever be a part of our institution’s fabric as an athletic director, coach, teacher, and mentor. We are humbled and honored to host a celebration of his life in his gymnasium.”

Alterowitz also served as the athletic director for 15 years and the physical education department head for 25 years. In 1961, the Health and Physical Education building was built, and the main gymnasium inside was renamed Alterowitz Gymnasium in 1988.

“Dr. Alterowitz’s passion for education was absolutely amazing,” MSUB Athletic Director Krista Montague said. “The positive impact he had on thousands of young people is truly beyond measure. I was fortunate to experience Dr. A’s unparalleled zest for collegiate sports and his dedication to Yellowjacket athletes firsthand as a basketball student-athlete in the 1990s. He would speak to our team each year, imparting words of wisdom and inspiration.

“Most recently, I had the pleasure of receiving a voice message from Dr. A during the Athletic Director search process. His words of encouragement and support were incredibly empowering. He also took the time to write me a note of congratulations when I was hired as A.D. earlier this month, which shows that his compassion for people continued even in through last stages of his life.”

Alterowitz was born in Bronx, N.Y. on July 14, 1917, to Romanian immigrants David and Lena. Just 13 years prior, the elder Alterowitz moved his small family to America in hopes of carving out a better life for them as did most of those who immigrated to the country during that time. The Alterowitzes raised five children; three daughters and two sons.

“Shorty” was named to the Montana State University Billings/Eastern Montana College Hall of Fame and Distinction as a member of the 1995 class. The last time he was able to visit the campus was in 2010 as his physical health has waned.

Alterowitz has one son, Michael, and two daughters, Laurie and Linda; as well as four grandchildren and two great-grandchildren.

“Dr. Alterowitz had a commitment to a holistic student experience for students and student-athletes,” Montague said. “Developing the total person, teaching life skills which prepare students for life after college and college athletics is something I know Dr. A. was passionate about.”

Alterowitz earned numerous accolades for his services in teaching including being named the Recipient of Honor of Distinguished Professor of Teaching by his fellow colleagues at EMC. He was named the Poet Laureate of the American Health and Physical Education Society. He wrote a book of poetry, “Black, White and Beautiful” which was published in 1971. Alterowitz served as the Northwest District Representative of the American Alliance for Health and Physical Education Society and was also named the Poet Laureate.

“When I graduated from City College of New York, one of my professors asked me what I want to do with my life,” Alterowitz was quoted by Sue Hart in the Yellow-Stone & Blue book. “I told him I’d make a pretty good lawyer. He didn’t miss a beat in answering that: “Why be a pretty good lawyer when you could be a great teacher?”