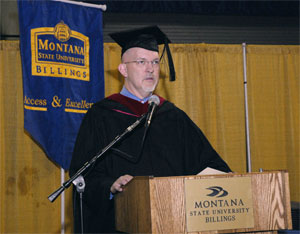 Carter began working at MSU Billings in August of 2004 after an outstanding career at the Billings Gazette.  His tenure at MSU Billings found him working alongside Chancellor Ron Sexton from 2004 – 2010, and Chancellor Rolf Groseth from 2010 – present.  “Dan’s competence and results have been obvious to all throughout the state with whom he has worked,” commented Chancellor Groseth.  “As a campus, we will feel a deep sense of loss and void from his departure and he will always command our attention and our respect.  On a personal note, he was one of the people who encouraged me to come to Billings and will continue to be a trusted advisor.”

Carter’s earnest one-on-one interactions with local media garnered him praise by many members of the press.  Although he spent much of his time cultivating relationships throughout the community; Carter may be best known for his time spent working with state and local officials on behalf of MSU Billings and the Montana University System.

His legacy, however, will be one of compassion and caring for all Montana students.  “Dan was the first person I would turn to when I needed advice,” said ASMSUB President, Isaiah Garrison.  In May of 2012, Carter was awarded the inaugural “Student Advocate Award” from the Montana Board of Regents.  Carter also was awarded the “Golden Service Award” and the “Walter and Charlotte Pippenger Excellence in Innovation Award” in 2011 and 2012 respectively.

Carter’s caring for the youth of Montana went far beyond mentoring college-aged students.  “Each year Dano graciously volunteered his time to be a counselor at Montana Boys State,” remarked co-worker Debbie Brown.  “It was time he didn’t necessarily have to spare, but he was more than willing to give knowing he was making a difference in a kid’s life.”

Famous screenwriter, Anita Loos once wrote, “Memory is more indelible than ink.”  Dan Carter was someone who used ink to create memories.  A quick search of the MSU Billings archived stories will display nearly 1,000 entries.  All penned by Dan Carter.  Many were written about an outstanding alumni, faculty, or staff member, but more often than not, Dan wrote about students.  Of special interest were those students who overcame obstacles in their lives to persevere and attain a degree at MSU Billings.

The pinnacle of any students’ career is that moment when they read their name in the commencement program.  It is that snapshot in time where years of hard work become reality.  It is this indelible memory of parents rejoicing, grandparents weeping, and siblings focusing on the road ahead where Dan Carter shined the brightest.  He would spend tireless hours making sure every graduate was properly represented in the program and that the degree they achieved did not go without notice.  Every student who held their head up high as they walked across the stage heard their name read aloud by Dan Carter.  All told, that is nearly 5,000 individual memories.  Memories, that won’t soon be forgotten.

When asked about Carter’s final days at MSU Billings, Chancellor Groseth reflected. “I know that ExxonMobil is fortunate to be the beneficiary of our loss.  However, all of us in Billings are fortunate that Dan will continue to be in the area and to be active in pointing out the things that will improve our community and our state. We send him with our best wishes and want him to know he will always have a home at Montana State University Billings.”