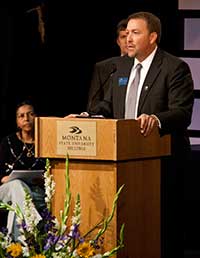 “Stacy has been a tremendous contributor to the success of MSU Billings and the Montana University System,” remarked MSU Billings Chancellor Rolf Groseth.  “He will be greatly missed at his Alma mater. I will personally miss his experience and advice in our deliberations on university-wide issues.  However, the community of Miles City and the students who attend MCC will be gaining someone who thoroughly knows Montana and two-year education.  As one of our great Alumnus, Stacy will always have a home at MSU Billings.”