MSU BILLINGS NEWS SERVICES — A year after the Billings community dedicated a memorial to honor those who died and served in the aftermath of the Sept. 11, 2001 tragedy, a commemoration ceremony will be held at its site at City College at Montana State University Billings. 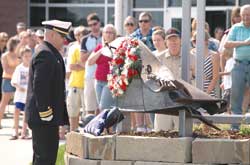 The event, which is free and open to the public, will begin at 7:30 a.m. on Tuesday, Sept., 11 at the site of Montana’s 9/11 Memorial at City College (formerly the College of Technology). The ceremony will involve administrators, faculty, staff and students from MSU Billings as well as representatives from the Billings Police Department, Billings Fire Department and local Boy Scouts.

Here is a look at the schedule for the event:

Montana’s 9/11 Memorial stands as a steadfast, silent witness to the memory of those who lost their lives at the hands of terrorism on that landmark day 11 years ago. It also provides a place of reflection and honor for those who serve others, whether in the armed services, police, fire or emergency response.

The centerpiece of the memorial is a 600-pound piece of steel I-beam recovered from the rubble of the World Trade Center, which collapsed after the attacks a decade ago.  I was formally dedicated on Sept. 11, 2011.

Volunteers from across the community worked together through the spring and summer of 2011 to make the project a reality. City College faculty members developed the idea for the memorial and secured the piece of iron. Representatives from MSU Billings, Exchange Clubs of Billings, Stockman Bank and the Billings Fire Department broke ground on the site and worked by hand to give the area its shape. Workers from EEC Inc., and CMG Construction followed up with dirt removal and site preparation. Fisher Sand and Gravel poured the slab.

Set on a 40-foot diameter concrete pad, the 4,150 square-foot memorial features benches for personal reflection as well as informational panels set in sandstone around the edges. At the center is a 12-foot diameter raised platform on which the I-beam rests. Rising above the I-beam are two 16-foot tube steel towers, a scaled-down visual replica of the World Trade Center towers that fell on Sept. 11, 2001.

Faculty and students make use of the memorial ways to enhance the academic experience. Awards will be given to 10 students for outstanding 9/11-related class or personal projects produced during this academic year. These projects could include a research paper, report, speech, lesson plan, literary work, art, computer animation or music. Five $100 awards are open to students from all colleges and departments, and five will be awarded to City College students. The 10 awardees will be selected by a university-wide committee of faculty and staff.

In addition, the memorial led to a community project. The Montana 9/11 Oral History Project was a service learning activity for students and community members. The objective is to collect, record and archive 9/11 memories from the Billings community with the intention of sharing their unique perspectives with future generations.  Ultimately, the project will create a greater understanding of what the 9/11 attacks mean to Montanans and how the events of September 11, 2001, shaped our community over the course of the last decade.

For more information on the memorial ceremony next week, contact Elizabeth Fullon at City College at 247-3085.

PHOTO ABOVE: A wreath is placed at Montana’s 9/11 Memorial during the formal dedication of the memorial on Sept. 11, 2011. The memorial, located at City College at MSU Billings, 3803 Central Ave., will be host to a commemoration ceremony on Tuesday, Sept. 11.