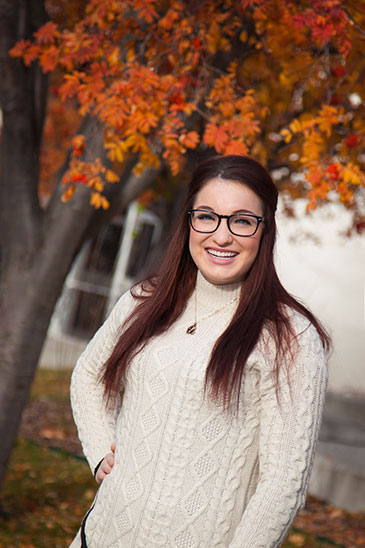 What are your roles as the women’s basketball team captain?

“I’ve been a team captain for three years and then this year my role as a team captain is probably the biggest it has ever been. I can’t really have a bad day. As young as the team is, whether I realize it or not, all those girls look up to me. If I’m having a bad day they might have a bad practice and vice versa. I have to keep myself level-headed and sometimes that is a real challenge. I always have to keep talking and encouraging, but it’s so much more than that. I have 12 girls that I am responsible for everyday and I have to make sure they’re doing okay and are adjusting, especially the younger girls. Along with that I have to lead them on the floor. If I’m having a bad game it can’t really matter and I can’t let it show because I still have to make sure they have good games. If someone on the team isn’t having a good game, it is my job to help build them up. So really, it’s a complicated role but I love it and it fits my personality type. Sometimes it gets hard because you have to realize that at some point you have to take care of yourself too, but you get put last as captain. And that’s okay, I’d rather everyone else is okay and me figure it out later.”

What are the challenges of being a student athlete?

“I used to work three jobs, go to school, play basketball and get extra time in the gym. But really it’s all about time management. If you can’t manage your time it’s crazy how fast things start to slip, especially when we are traveling. You think about the time we spend in the air and then running through airports–it’s hard. So if you don’t use your time wisely when you have it, school starts to slip. When you try to make up your school you don’t get that extra time in the gym. But for me I don’t think I would have as good of grades as I do if I didn’t play basketball. I think it is very easy to get distracted. Basketball does a really good job of keeping me on track. Coach expects good grades and if you don’t get good grades things start to be taken away like book scholarships. When you have a coach like that it turns into more of a pride thing where you don’t want to let your coach down. I’m a very competitive person so working for good grades is kind of a competition between me and the professor and the school.”

How was your journey recovering from a pretty serious knee injury?

“This sounds crazy but it was life changing for me. It happened with a sixth of a second left in a game, so pretty unreal. We were almost done and out of the game when I felt something pop. I was screaming and I knew what I had done the second it happened. I could only think about everything, how fast my life had just changed in a sixth of a second. I got not the brightest idea to play again that season because I heard you could play on a torn ACL. At that point we were making it to the Sweet Sixteen and we were the conference champs so I held off on surgery. I just rehabbed hard and sat on the bench during games but I wanted to play in the Sweet Sixteen. The first game I was put in just to throw a basketball pass, but the second game my coach had more confidence in me and that’s what you want in a coach. I knew the risks of playing and the doctors weren’t happy. I went up for a rebound and got undercut, landed on my knee and blew out my ACL, MCL, tore some of my meniscus and I did some cartilage damage. So it wasn’t just an ACL that I was trying to recover from, it was basically a knee replacement that I was dealing with.

For the first two weeks I was optimistic and thought everything would be fine, but things started to get real and I had surgery. After surgery I found out all the damage that was done and the doctor was pretty serious with me. That’s when I realized it wasn’t going to be a nice trip back to playing again. I was on crutches for six weeks and it was terrible. I had to learn how to walk, how to run and how to play basketball again. I couldn’t go out and do things that I wanted because I was on crutches—I was missing out on things and that was hard. I went from being the captain that year and playing such an important role to sitting on my bed, letting my mom take care of me. I am so lucky that I was in Billings when I was injured because my mom and my dad really helped me through everything. I rehabbed so hard it made me sick. I would leave frustrated and mad but I knew I had to keep going back.

The following year when it came to deciding whether I was going to medical redshirt or not, the doctors told me that no, I couldn’t play. That was one of the hardest things I’ve been told in my life. I had worked so hard and I care so much. I was worried that my coach and teammates didn’t think I had worked hard enough to play. My doctors told me that I had one chance to do it right and if I reinjured my knee, I would never play again. I had to listen to the doctors because I want basketball to be a part of my life forever. I had to focus on the positives of redshirting. Now I’m able to come back and be basically back to normal. I got a chunk of grad school paid for and in the long run it’s a blessing, or at least a positive thing I can see. Through the injury I learned a lot about myself and I know I’m more than just a basketball player. And now, I can say that I am more than that and basketball doesn’t define me as a person.”

How does it feel being back on the basketball court after your injury?

“It feels really good. I’ve been playing pretty well at practice but when we played the alumni game I felt like I was everywhere and so I was pretty discouraged. I wasn’t playing how I used to play and things weren’t coming as easy for me. Coach sat me down and said, ‘Janiel you haven’t played in twenty months.’ When he said that I was like wow, it really has been that long. And the next couple games were hard too, and I went back to my coach and he told me that it’s only been two games, I couldn’t worry because at some point it is all going to click together, and I had to be patient. It felt great to be back on the court but I had to question whether I was trying to do the impossible, whether trying to come back was smart. As soon as we had that first game, all of it came back—the nerves, the jitters and the feeling of purpose. After that I don’t question if I’m meant to be here and if I really love it. Even though we have to run suicides all the time, I wouldn’t trade it for anything.”

What do you hope for in your team this year?

“Out of the five years and the five different teams that I’ve been a part of here, this is by far the fastest team we’ve had. We are young, but our practices are hard and good. I can only see us growing from here. In the preseason we’ve played top rated teams and I think it’s good for us to see that kind of competition. I look for us to have a winning record and hope that we can defend our home court and make it to the GNAC tournament.”

What are your plans for the future?

“I used to be such a planner before I tore my ACL but I don’t do that anymore. Depending on how this season goes, I would love to go play overseas. I might stay here and finish graduate school, but in the long run I want to work at a hospital. I know that there is a hospital in South Dakota that is funding and working to build hospitals in Africa and I know I would love to be a part of that. I can also see myself working with the American Red Cross. I want something that will keep me moving and I think it would be great to travel. Every time I do travel it makes me feel blessed to be from Montana.”