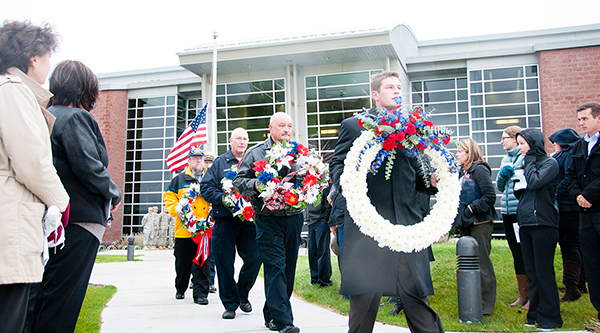 City College at MSU Billings student, Conner Gregg, leads a processional of police,  fire and other civil servants during the wreath-laying ceremony in 2014.

MSU BILLINGS NEWS SERVICES — It's been fourteen years since al-Qaida terrorists hijacked commercial airlines and changed the course of history and American lives forever and politicians and citizens alike continue to grapple with the fallout. 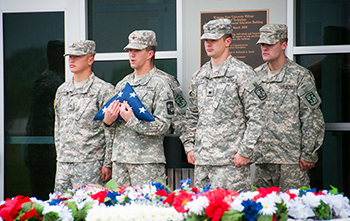 However, in the days after the horrific attacks the United States celebrated and saw much good. We pulled together in spirit and rooted for first responders putting their lives on the line at ground zero. We grieved the many lives lost and forever altered.

In the years following, the country watched New York City rebuild and we optimistically wanted a better, safer world.

It is in that spirit that City College at MSU Billings hosts its annual Montana's 9/11 Memorial: A Community's Commemoration on Friday, September 11.

Sonja Choriki, president of the Associated Students of MSU Billings, was only a fourth grader when the attacks took place but she remembers the events well. She easily recalls the worry that filled her home as her parents watched the news and the twin towers at the World Trade Center in New York City crumbled on screen.

"I had an uncle in New York. My parents weren't telling me anything and they sent me to school," Choriki said. "At school we watched the news on T.V. and I remember feeling dumbfounded and awkward."

Like many Americans, Choriki said "time stood still," on that late, warm summer day and she said none of the kids wanted to play during recess.

"It just felt wrong to play," she said. "I don't think anyone really knew what to do."

Today, Americans reflect on 9/11 for many reasons and Choriki is proud to be a part of helping coordinate this year's annual MSUB tradition in hosting a memorial event.

Sept. 11 is a day that many don't reflect on day in and day out, even though the event continues to impact our daily lives and nation today. Poignantly, the City College campus has a reminder of that impact that many don't even realize it is there, unless you stop and really look at it.

City College Dean Clifford Coppersmith said he first paused to take in the 9/11 memorial installation in front of the Health Science Building after walking past it for a couple of weeks. The jutting metallic sculpture reaching into the sky is from material taken out of Ground Zero and was created by former City College students and staff.

Coppersmith, who's former professional past includes stints with the military reserve and Central Intelligence Agency, has family in the military and watched the attacks unfold on television. His background gave him the knowledge that a pivotal moment was taking place and things would never quite be the same.

Coppersmith will be providing the Opening for the 9/11 Memorial Commemoration.

"Most of us went into work that day," Coppersmith said, adding that he had a lot of conversations with his students at the College of Eastern Utah where he taught anthropology and history about the magnitude of the attacks.

As Sept. 11 draws closer, when Coppersmith passes the striking memorial today he can't help but think of the thousands of lives lost in the attack and the war, the commitment made by the government to protect its people and country and the multitude of people who did the same, including the first responders.

The Commemoration begins at 7:45 a.m. and will include a presentation of colors by the MSU Billings ROTC and wreath service by the Billings Police and Fire departments. Refreshments will be served immediately following the ceremony in the Health Sciences building.