MSU BILLINGS NEWS SERVICES — A community effort to construct a memorial honoring the lives lost and service given in the wake of the Sept. 11, 2001 attacks continues to move forward.

Ground was broken for the circular memorial area on Friday, July 15 and this past Monday (July 25) concrete was poured for the slab that will serve as the base of the memorial. In the next few weeks, other details — from benches to the sandstone rocks highlighting the structure — will start to show up at the site.

The 9/11 memorial, to be located at the MSU Billings College of Technology campus, 3803 Central Ave., will stand as a steadfast, silent witness to the memory of those who lost their lives at the hands of terrorism on that landmark day nearly 10 years ago. It will also provide a place of reflection and honor for those who serve others, whether in the armed services, police, fire or emergency response.

The centerpiece of the memorial will be a 600-pound piece of steel I-beam recovered from the rubble of the World Trade Center, which collapsed after the attacks a decade ago. The memorial will be dedicated at a special community commemoration on Sunday, Sept. 11, 2011 at 2 p.m. just east of the MSU Billings COT’s Health Sciences Building.

Volunteers from across the community have worked to make the project a reality. On July 15, representatives from MSU Billings, Exchange Clubs of Billings, Stockman Bank, and the Billings Fire Department broke ground on the site and worked by hand to give the area its shape. Workers from EEC Inc., and CMG Construction followed up with dirt removal and site preparation. Fisher Sand and Gravel poured the slab on Monday.

Set on a 40-foot diameter concrete pad, the 4,150 square-foot memorial will feature benches for personal reflection as well as informational panels set in sandstone around the edges. At the center will be a 12-foot diameter raised platform on which the I-beam will rest. Rising above the I-beam will be two 16-foot tube steel towers, a scaled-down visual replica of the World Trade Center towers that fell on Sept. 11, 2001. 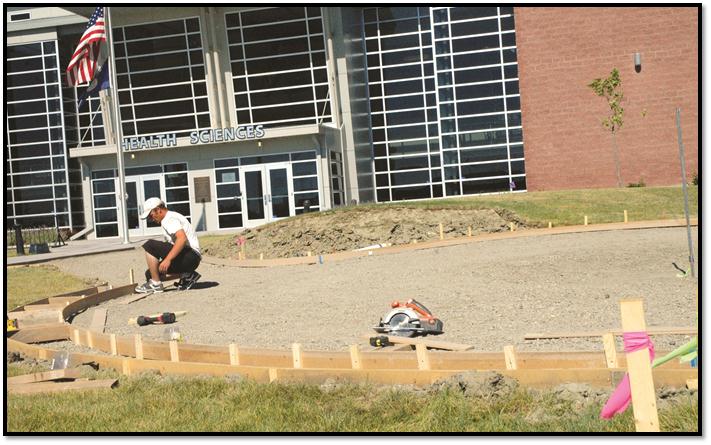 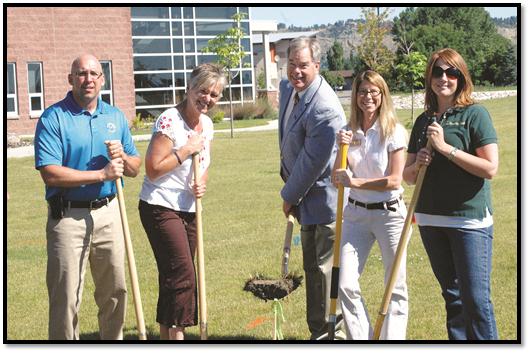 Anyone who wants to donate to the development or the memorial or keep up to date with developments, can go to www.msubillings.edu/911memorial. Donations can also be made through the MSU Billings Foundation at 657-2244.

Memorial Progress 2: A construction worker with EEC Inc., puts some finishing touches on the forms for the boundary of the Montana 9/11 Memorial project at the MSU Billings College of Technology. Workers and companies have donated time and supplies to help keep the project moving.

Memorial Progress: A trucks waits for concrete to pour in to the 9/11 Memorial at the MSU Billings COT earlier this week.