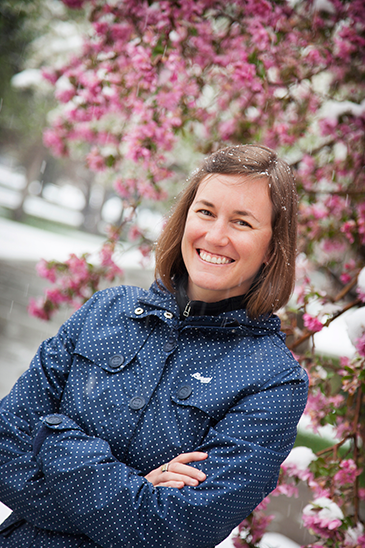 When did you know you wanted to be an engineer?

“I was interested in science at a pretty young age. I didn’t know about engineering though. When I was fourth or fifth grade I remember really wanting to be a geologist. I grew up in Cleveland, Ohio, which is right on Lake Eerie, and my dad used to take me to the beach all the time in the summer. Some of the beaches are rocky, so we spent a lot of time picking rocks. Then I think someone got me like a rock and minerals book. I also really liked to draw around that age, like house plans. I always drew houses with towers, so I always drew my bedroom so it would be in the tower. It wasn’t until high school that I understood that engineering was a good career option for me. I’m a really practical person so when I went to college I wanted something that was going to provide me with a concrete job opportunity. Growing up, my grandpa and uncles owned a construction company and then I’ve always been into architecture stuff­. All of this combined helped form me to become a civil engineer.”

Do you think it is important to introduce the science, technology, engineering and math (STEM) fields to girls at a young age?

“I think it’s important to normalize the subjects just so it is not something scary or different, but just a part of life like reading. People have this nervousness about it so I think it is good for young girls to be exposed to it and see women in those fields so it doesn’t seem out of the ordinary.”

When you went through school, did you have many women colleagues?

“I would say only about 10 percent were women. But it didn’t bother me, because that’s just who I am. For some people it would, not having that community around you. There are definitely some engineering disciplines that are more equalized than others, but in civil engineering—which is what my degree is in—there is a low percentage of women. Even in my Intro to Engineering class I teach here at MSUB, out of the 20 students I have enrolled in the class, there are just two women.”

Did you ever encounter problems working in a male dominant field?

“I noticed it a lot working as a consultant, and it was never with any of the engineers. Sometimes the administrative people would be really helpful to my male colleagues but they wouldn’t make copies for me, that sort of thing. I also had a run in with one technician. Sometimes they would do some drafting or other things like that. I’ve had issues with that level of employee where I think they have insecurity, jealousy or something. One guy actually cornered me in the hallway and told me that I’d never get as far as my male counterparts. You know the problems are not totally gone, but it’s better.”

Women have come a long ways in the past 50 years in the STEM fields. What are some of the significant milestones that you have witnessed?

“MSU Bozeman has a Women in Engineering dinner where the dean of the College of Engineering reports how they have made a considerate effort to increase the number of female faculty in Bozeman. It has gone up a lot in the last five years, which I think is awesome. But what I noticed is that among the head of the departments at the dinner, they are all men. But I do think it’s important to increase the number of female faculty. Imagine if you went into a department and every single faculty person was a man. You would feel intimidated. That is a change that I have really seen in the last five years or so in my graduate career. But there is lot of political stuff that still comes with that, like being hired just because you are a woman and not being hired because of merit. That was something I concerned me when I looked for jobs. I really hoped that I wouldn’t be hired just for diversity.”

What are barriers that women still face today?

“I think we are still battling this decision where it seems like you have to decide whether you are going to be a career person or a family person. There was so much of talk amongst my girlfriends during graduate school about when to have the baby. During graduate school would be really stressful and you can’t while you are trying to get tenure.”

How did you become involved in Chicks in Science?

“Shorty after I got here everybody was like, ‘Oh, hey an engineer!’ I was asked to be a part of several things, which is really nice. I was asked to be on the organizing committee for Chicks in Science. At the same time I was also asked if I was willing to be one of the STEM Stars, which is a program in the morning where the girls can have a one-on-one time with a professional in a STEM field.”

Beyond being a STEM Star, what does your involvement in the event look like?

“I’ve been working with my engineering students and the MSUB Engineering Society student club. They really wanted to get involved in Chicks in Science. Many of them had been involved in it through the career center. So many of my students are coming from the career center where they have some high school engineering program. We are having a booth during the main event. We’ve been building trebuchets in Intro to Engineering as a final project. We thought since we’re building them anyway it’d be a fun thing to bring to Chicks in Science. We have these little foam golf balls to use with the trebuchets and we’ve been talking about trying to get them into the basketball hoops. I’m not really sure if it’s going to pan out, but that’s the idea.”

What are you looking forward to most with the Chicks in Science event?