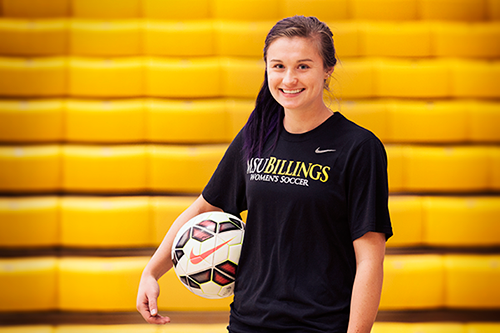 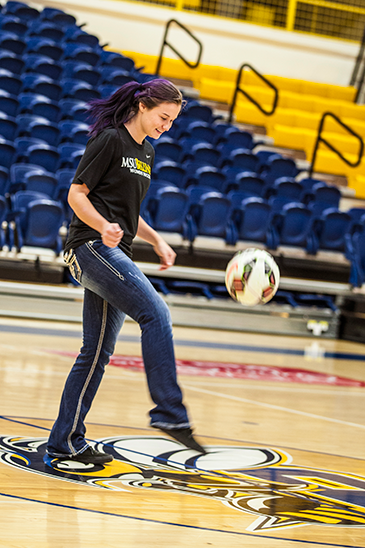 All within her second year playing for Montana State University Billings’ Women’s Soccer team, Haley McFarlane has earned first-team all-GNAC honors and Daktronics all-West Region defender. Not only is she successful on the field with her roles as defender and team captain, she looks to the future and aspires to be a doctor.

What is your role as one of the team’s captains?

“Just to be a leader, run the warm-ups and get the team going on game day. We have to try and keep things the same—our team is weird for superstitions. We each have specific things we need to do before the game, like certain spots we sit in for pre-game.”

What are some of the challenges being a college athlete?

“Keeping the load as light as possible between school and soccer because of how much we travel. You need to make sure you’re performing well. When you’re traveling it’s harder because your body is just tired from being on a plane or bus. Also you have to keep on top of schoolwork because you have to remember school is continuous even while you are gone.”

What does earning first-team all-GNAC honors mean to you?

“It’s easy to be considered great when you have such a good team behind you, and this year we had something special. I can’t do it without my teammates. It should be just as rewarding for them as it is for me.”

What is important for your team off the field?

“We are one big family. We love each other and hang out all the time. We are constantly interacting and I think that’s one of the most important things because you have to keep that chemistry off the field and in the off-season. It’s so much easier to play with someone when you have chemistry with them.”

What do you hope for in the future?

“I want to find a path that I’m happy with, a career that I will be successful in. With soccer, I hope we get to the tournaments next year and I want this program to continue being successful.”

University Relations and Communications Note:
The women’s soccer team with a grade point average of 3.21 earned the Team Academic Award from the National Soccer Coaches Association of America for the thirteenth straight year.