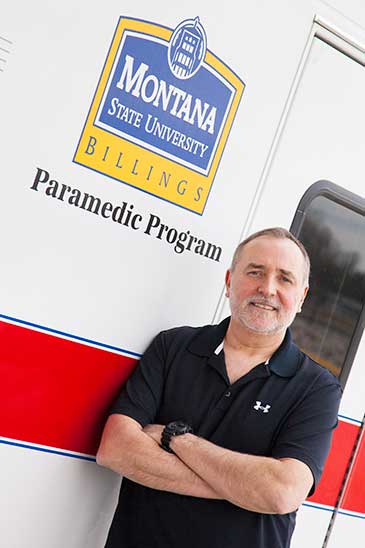 How did you first get involved in paramedics?

“I was a Navy corpsman back in the early 1970s. I took care of the boot camp kids, but in my last year they moved me to the treatment room. I did sutures and stuff like that but the ambulance was there just in case someone got really hurt we would take them to the hospital. That’s when I started riding in the ambulance. When I came out of the military, I went right into paramedic school and became a paramedic in 1977. I’ve been teaching paramedics since 1985 and have been in Billings since 1996.”

What made you come to Montana?

“I started teaching for hospitals at the end of 1989 and I decided I wanted to move West. And by pure luck, I sent the state EMS (Emergency Medical Services) directors of four western states and said, ‘Hey here’s my resume if anyone is interested’. Billings Clinic was just starting their paramedic program so after the state director contacted them, they brought me out and that’s how I got to Billings. I thought, ‘what do I have to lose’”?

What makes the paramedic program stand out from the others?

“We are an extremely rigorous program. The reason we are that way is because when my students go to the hospital they start doing things quickly. After prerequisites and a competitive selection, we can accept no more than 18 students­–that’s as many as we can stick in the hospitals. Students come in September. By mid-October they are standing in the operating room intubating live patients. Two weeks later they are in the emergency room starting IVs. Because of that, we bombard them with competencies to make sure they are ready to do that.”

“For me, I give them constant challenges. We are not a normal class, and if you take a test from me I’m probably going to turn on music, the TV and have lots of distractions because they have to learn how to work around chaos. There is no such thing as quiet. We never know what they will face in the field. Instead of practicing a skill on a table I’ll say, ‘Let’s stick you in a closet, turn off the lights and put a pin light in your mouth and see if you can do an IV in a closet in the dark’. And that’s because it is the kind of thing they are going to have to do. The students like that. It’s adventuresome and when they get to real patients they won’t be so overwhelmed.”

What are some key characteristics you look for in students applying for the program?

“I want students who will challenge me and just because I say something, it doesn’t make it true. I want them to say, ‘Cite your source,’ because if someone is on the scene and a physician gives an order and it’s wrong, they have to be strong enough or confident in their decision to speak up. We tell the students they are the true safety net for their patients.” 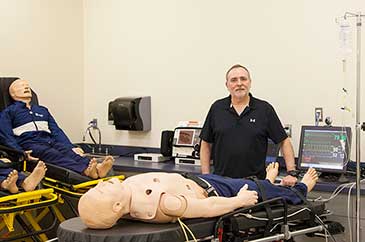 What is something you always look forward to in the classroom?

“One of the things I always get excited about is watching them transfer the knowledge from one call to another and watching them multitask. In the start of the semester we began teaching them to read EKGs (electrocardiogram) and it would take them two minutes to read it. Now we’re at the point were we show them the EKG and they read it in 15 seconds while multitasking doing other skills. It’s kind of cool to watch them baby step into that next level.”

What do you learn from your students?

“My students say some things in class and I’ll think, ‘I’ve never thought of it that way.’ They give me a different viewpoint. I’m used to teaching the same things year after year, and if a student asks a question, another student may give their interpretation of the answer and sometimes that’s better because they are just learning the information for the first time too.”

Related Story: An article Dave Gurchiek wrote titled “The Five Phases of Preceptorship” was published in the November 2014 edition of EMSWorld, which reaches more than 200,000 emergency care providers worldwide.