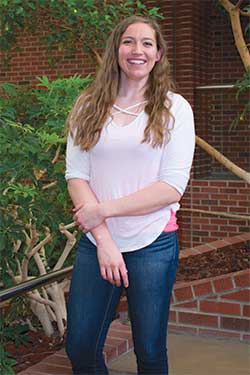 Athletics drew Alisha Breen to Montana State University Billings. She already knew and admired a number of the girls on the basketball team. MSUB’s College of Allied Health Professions was a natural fit as she looked to go into physical therapy, and the health and human performance option fit the ticket.

Breen’s interest in her major was sparked by her physical therapist who encouraged her to pursue the field. Getting to job shadow him and see an ACL surgery confirmed that she was headed in the right direction.

This year has been especially memorable for Breen as a senior on the women’s basketball team. She and teammates ended their season on a high note becoming West Region Champions and advancing to the Elite 8 NCAA basketball tournament. Breen herself was named an Academic All-American, an honor that requires great commitment and dedication on the courts and in the classroom. While earning the Academic All-American award is rare, Breen is actually the second recipient from MSUB in two years — a great testament for the university.

An outstanding student athlete on the court and in the classroom, Breen is also active in the Billings community. With her basketball teammates, she completed many community service projects like Pink Night with St. Vincent Healthcare Foundation’s Eva Project, and hosting summer and winter basketball camps for youth at MSUB and in her hometown of Choteau.

Breen is graduating with a bachelor of science in Health and Human Performance along with two minors—one in Coaching, the other in Business.

“It is exciting to be selected for these awards and shows my hard work as a student athlete. To end my time at MSUB with these honors adds to an already unforgettable year. Our post-season run, winning six games in a row with six upsets, and competing in the Elite 8 basketball tournament, was my memorable experience. To finish my senior year like this, it’s definitely special.”

A focus on family is one of the reasons that Billings native Sarah Radovich decided to stay in her hometown to pursue higher education at Montana State University Billings. After her mother was diagnosed with a brain tumor, Radovich and her brother both decided to stay home so that they could help take care of their mom. Radovich knew that the education program at MSUB was outstanding, and some even boasted it better than Bozeman due to the small class size, reasonable price, and the feeling of community on the smaller-sized campus.

A West High graduate and valedictorian, Radovich continued her academic successes at MSUB. She will receive her Bachelor of Science degree in Mathematics, Teaching Option at Commencement, finishing with a 3.98 GPA. In addition to being named a 2018 Outstanding Undergraduate, Radovich has also been named the Outstanding Student for the Department of Mathematics at MSUB.

The camaraderie amongst fellow students in the math department is something that Radovich fondly shared as they spent countless hours studying together, supporting each other, and persevering—knowing that at the end of the day, they would be successful and achieve good grades together.

Radovich worked as a math tutor in the Academic Support Center from her freshman through junior years, where she enjoyed helping fellow peers understand math concepts and witness their lightbulb moments when things clicked. Tutoring on campus was so enjoyable that she later became a private tutor.

Through her practicums and student teaching, Radovich learned that building relationships is one of the most important parts of teaching. While the teaching profession may not offer the higher salaries of other professions, having the opportunity to influence others is well worth it to her.

” Growing up, some kids want to be firefighters or nurses but I always wanted to be a teacher. Educators have the opportunity to shape kids’ lives and be a positive influence.”

Outside of her full course load and tutoring, she volunteered as a youth counselor at Clydehurst Christian Ranch on weekends and during the summer. At MSUB, she assisted Dr. David Snow with math club at Poly Drive Elementary and math circle with Dr. Tien Chih on campus.

She wants to share her love of math with others and influence kids as a teacher. “I understand that math is hard, I’m not a genius but I like the challenge of mathematics and want to instill that in kids. There’s so many things math teaches you about life.” 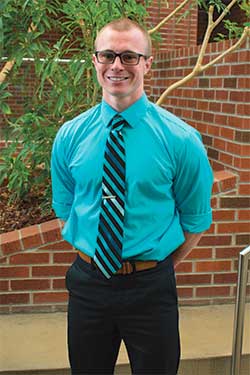 Wyatt Witty has been fascinated with the medical field throughout his life and grew up playing sports. In fact, he would administer first aid to his own wounds and had a self-proclaimed fascination with ace bandages.

While sports brought Witty to Montana State University Billings, his academic endeavors, especially internships, are what kept him here.  Recruited by Coach Alex Balog to play soccer, Witty transferred from Laramie County Community College to pursue his degree in health and human performance.

MSUB was a good fit for Witty, offering a degree he wanted, the opportunity to play soccer, and was close to home while being affordable. “I always knew that I wanted to do something in the medical field and have played soccer for years. When I transferred to MSUB to play soccer, I realized I wanted to work with the physical aspect of medicine.”

During his time at MSUB, Witty was a member of the 2014-2015 soccer team, inducted into the Chi Alpha Sigma honor society, and served on a search committee to hire a new faculty member for the department of Health and Human Performance.

One could say that soccer runs in Witty’s blood as it is a sport he has played and coached for years. He has coached club men’s soccer for four years and the Skyview girls’ soccer team for the last three years. Outside of coaching, Witty has helped with numerous clinics, coached individuals, and served as a personal trainer.

“MSUB’s program set me up for success in the field as a professional, receiving my accreditation in personal training and extensive research projects have paved the way and opened the door for me to pursue my doctorate of physical therapy.”