Billings native, Hazel Hunkins-Hallinan (1890-1982) was an American journalist and activist for women's suffrage and women's rights in both the United States and England.

Soon after graduating from Billings High School in 1908, she attended Vassar College and later earned a master’s degree in chemistry from the University of Missouri.

Denied the opportunity to teach chemistry and physics because she was a woman, Hunkins-Hallinan was inspired to join the National Woman’s Party—organizing in Montana, California, Utah and New York.

Much of her suffrage activities were centered in Washington, D.C., where she became a prominent figure in the picket lines, notable chaining herself to the gates of the White House. She and a group of suffragists were eventually arrested and sentenced to 15 days in jail as well as the Occoquan Workhouse where they participated in a hunger strike.

In a speech given to the Women's Press Club in Washington, DC on August 23, 1977, Hunkins-Hallinan describes her experiences as a woman growing up in the early twentieth century, beginning with being told when she was young that she could be a nurse but not a doctor, teach botany but not chemistry and could not participate in politics.

She traces her activities in support of women's suffrage, and touches on the problems of women and equal pay, citing events and names important for the struggle for civil rights in the United States and England.

In 1920, after suffrage was won in the United States, she moved to England and worked as a freelance journalist for the Chicago Tribune where she wrote a column under the pseudonym Ann Whittingham.

She was joined a few months later by journalist Charles Thomas Hallinan, who she eventually married and had four children.

She soon became interested in the struggle for women's rights there. During World War II she took a job with the U.S. State Department and became one of the first four women ever made "officers" of the Foreign Service.

"To add to the anti-feminist finale," she laughs, "we were terminated the day after the peace was signed."

Hunkins-Hallinan was the author and the editor of In Her Own Right (1968), a collection of feminist essays.

She was an active member and served terms as secretary and president of a British feminist organization called the Six Point Group. She was involved in several other clubs and organizations, including the Americans for Democratic Action and the Vassar Club of London.

Hallinan died at the age of 91 in London. She is buried in Billings with her parents and her husband 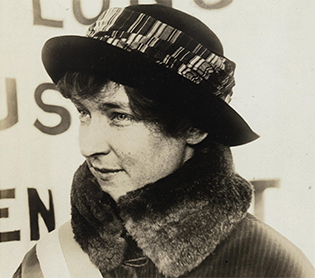