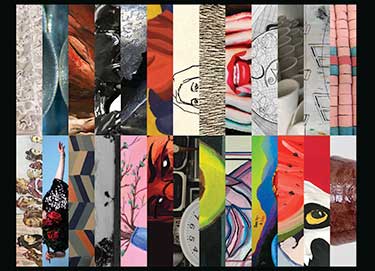 Nerves, sweat, creativity, the beginnings of something amazing! Twenty-six artists, all students and all accepted by our region’s well-known curator, Bob Durden. An exhibition developed, designed, promoted and run by Department of Art students at MSU Billings.

The opening reception for Autonomous Intersections, MSUB’s 2019 Juried Student Exhibition, will be held at the Northcutt Steele Gallery on the campus of MSU- Billings beginning at 5 pm on Thursday, April 11, 2019. It is catered, free to the public and parking is free after 5 pm. Awards will be presented at 6 pm. The reception will be held in conjunction with MSUB’s annual Research, Creativity & Community Involvement Conference.

The students responded to our call for art by submitting their best work from the last two years of   classes. The results are a mixed medium mash-up with many independent ideas, more 3D works (  (sculpture, installation and ceramics) than in the last two years combined and all connecting in a space truly worthy of exploration. As the students have explored new processes and found passion for contemporary concepts, they visited a vast array of subject matter. Come and see all that is our AUTONOMOUS INTERSECTIONS of ideas.

Guest curator, Bob Durden
Guest curator Bob Durden is the owner/director of Durden Gallery located at 2501 Montana Avenue, on the second floor of the historic Carlin Hotel. He has worked professionally in the arts and theater since 1990 having spent much of that time at the Yellowstone Art Museum in Billings, Montana, where he served as Senior Curator. He has organized exhibitions of notable regionally, nationally, and internationally known artists including: John Buck, Clarice Dreyer, Nina Katchadourian, Adonna Khare, R. B. Kitaj, Harold  Schlotzhauer, Marc Sijan, and Theodore Waddell, among many others. Additionally, he has held posts at Paris Gibson Square Museum of Art in Great Falls, Montana, where he served as Curator of Art. Durden has operated his own museum consulting business; directed the Yeiser Art Center in Paducah, Kentucky; exhibited his work in the western United States; taught Art, Communication Arts and Theater at universities; worked as a scene designer; and worked as a scenic carpenter and sculptor for Hollywood feature films. He is also an alumnus of MSU Billings. Find out more about Bob at his website: www.DurdenGallery.net

The Northcutt Steele Gallery is located on the first floor of the Liberal Arts building, which is located on the northwest corner of the Montana State University Billings campus. The gallery is open Monday-Friday from 8:00am to 4:00pm. For more information, including a parking map, visit www.facebook.com/northcuttsteelegallery. Funded in part by the Associated Students of MSUB. 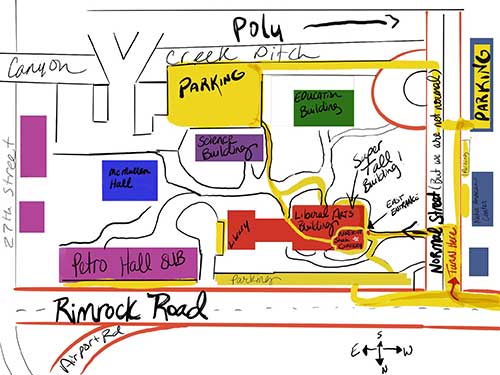