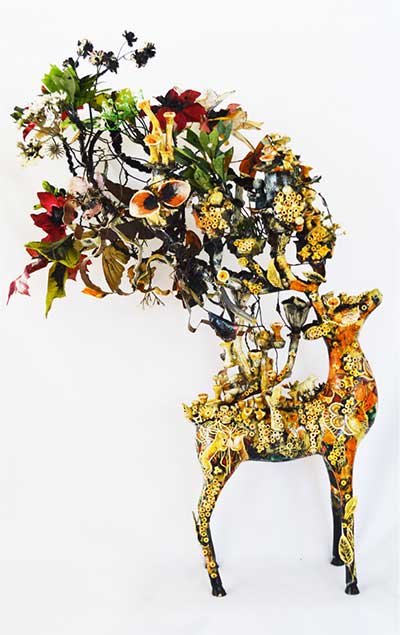 Northcutt Steele Gallery is pleased to present Jennifer Eli French's 'This Vibrant, Tarnished World', an installation created in response to the novel Station Eleven by Emily St. John Mandel. A reception will be held on Thursday, January 17 beginning at 5pm in the lobby of the Liberal Arts Building immediately in front of the gallery.

The exhibition is French's intricate, personal interpretion of the futuristic novel, Station Eleven by Emily St. John Mandel. A series of lectures, films, and book discussions will continue through February as a part of a community-wide celebration of the novel. The NEA Big Read in Billings is presented by The Writer's Voice in partnership with the MSU-Billings Library

In a mobile society, the things that we choose to preserve and carry become sacred. In Station Eleven, these cherished objects represent memory and longing for lost people, technologies, and ‘the sweetness of life on Earth’. ‘This Vibrant, Tarnished World’ is a mixed media installation created by Billings artist Jennifer Eli French in response to the themes of nostalgia and longing in Station Eleven. Incorporating found objects, wire, polymer clay, acrylic paint, and a carousel slide projector, French’s ‘relics from the future’ depict objects submerged in the ocean of time, encrusted with natural growths and detritus of a lost civilization

Born in Colorado, Jennifer Eli French moved frequently while growing up but always spent summers on her family ranch in Montana. After attending high school in England, she earned a BFA in painting from the Rhode Island School of Design. She returned to live and work in Montana in 2013. French derives inspiration from the worlds of Medieval art, Victoriana, the Western landscape, and “the strange beauty she finds in the darker corners of history” to create her intricately painted skulls, surreal paintings, and installations. She is represented by the Stapleton Gallery in Billings.